3 business lessons from the toughest race in the world 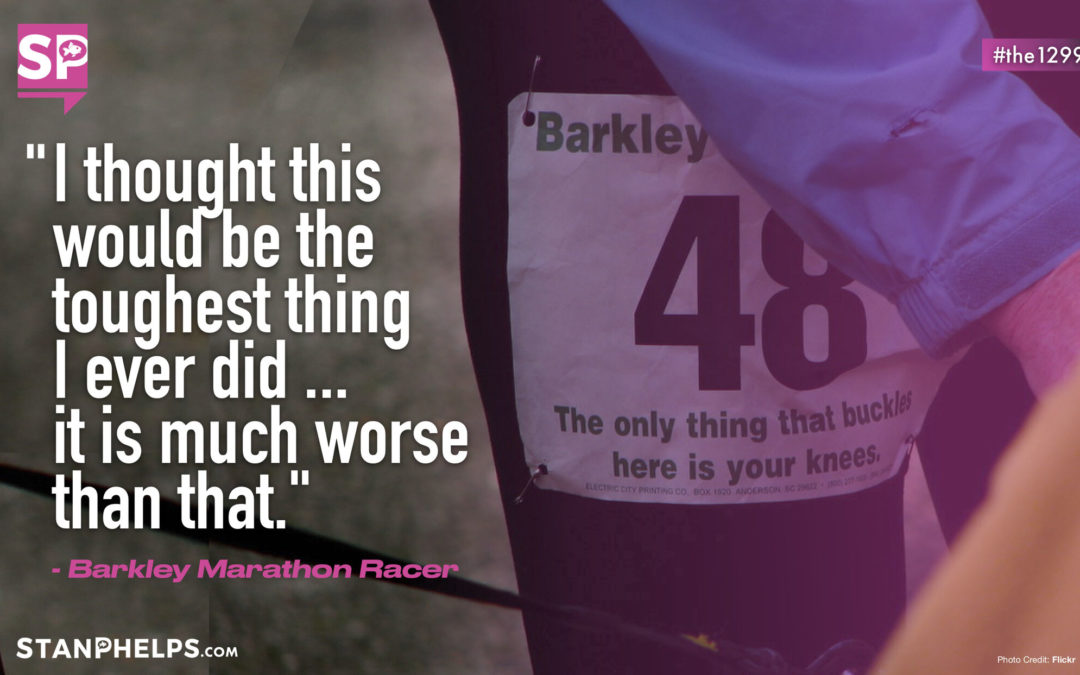 Not familiar with the Barkley Marathon? It just happened two weeks ago. And for the fifth year in a row, there were no finishers at the infamous race. In fact, in 36 years of the annual race in Tennessee, there have only been 15 finishers.

David Rendall and I feature the race in our book, “Pink Goldfish 2.0.”

I love this quote from a Barkley racer, “I thought this would be the toughest thing I ever did… it is much worse than that.”

What inspired this madness?

After 55 hours, he was found just eight miles away from the prison. Gary “Lazarus Lake” Cantrell thought he could have gone at least 100 miles in the time it took James Earl Ray to go just eight.

This gave him an idea for a race. Lazarus named it after his late friend Barry Barkley and set the course in the same rugged environment. Some years the race goes right by the Penitentiary. Five 20-mile loops that race participants have to complete within 60 hours.

Business Lesson 1: Challenge the norms of your industry

Normal marathons use timing chips to track runners on the course and as they finish. The Barkley Marathons have no electronic timing. Instead, runners collect pages from paperback books at various milestones along the way. For example, if you are runner #48, you rip out page 48 from the book at each checkpoint and bring it back with you to the finish line in a plastic bag. This year a runner lost his running belt containing all the pages. He found it after nearly three hours going up and down on a hill section of the course known as Little Hell. His race was over. Normal marathons provide a clear start time for the race. The Barkley Marathons have no set start time. A race starts an hour after the race organizer blows the conch shell. Normal marathons have a consistent date. This year Lazarus decided to start the race three weeks earlier than usual.

The race can be brutal. In 2006, 30 of the 40 race participants were unable to even complete the first 2 miles of a 100-mile race. Organizers have a little fun with racers that fall short. If you finish a loop after the allotted time, they get out the bugle. Runners hear “Taps” as they cross the end line. One lap in this race is an accomplishment. But racers who finish 3 loops in under 40 hours are credited with a partial finish award. Race organizers call it the “Fun Run” award.

The Barkley Marathon is a difficult course. They make the course harder by not marking it. The course also changes each year. And each time you finish a loop, you have to do the next loop in the opposite direction. Why? Just to make navigation that much more difficult.