Little ACTS OF KINDness make a big difference in business 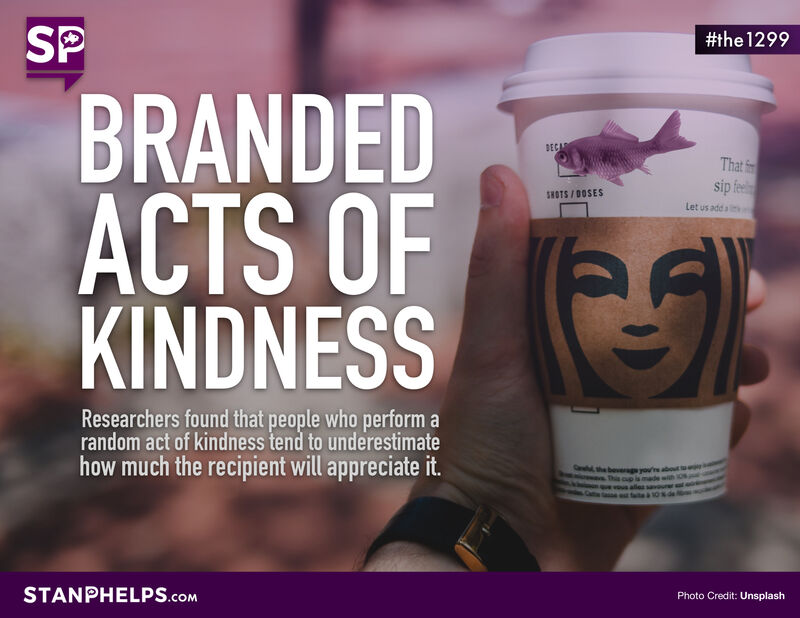 We don’t realize how much “little things” mean to others. Catherine Pearson shares the story of Erin Alexander in a recent article in The New York Times:

“In late August, Erin Alexander, 57, sat in the parking lot of a Target … and wept. Her sister-in-law had recently died, and Ms. Alexander was having a hard day.

A barista working at the Starbucks inside the Target was too. The espresso machine had broken down and she was clearly stressed. Ms. Alexander — who’d stopped crying and gone inside for some caffeine — smiled, ordered an iced green tea, and told her to hang in there. After picking up her order, she noticed a message on the cup: ‘Erin,’ the barista had scrawled next to a heart, ‘your soul is golden.’

‘I’m not sure I even necessarily know what ‘your soul is golden’ means,’ said Ms. Alexander, who laughed and cried while recalling the incident.
But the warmth of that small and unexpected gesture, from a stranger who had no inkling of what she was going through, moved her deeply…[She recalled] ‘that little thing made the rest of my day.'”

The article shares how researchers in eight different studies found that people who perform a random act of kindness tend to underestimate how much the recipient will appreciate it.

Little things can have a big impact.

So, what if you leveraged this concept as a business practice? Providing an act of kindness or a thoughtful little extra for customers. It reasons that they’d also appreciate it much more than you realize.

Having researched over 1,000 examples for “Purple Goldfish 2.0”, I can tell you there are three types of “acts of kindness” in business:

1. Random – These are good deeds or unexpected acts such as paying tolls, filling parking meters, or buying gas for consumers. They are usually one-off, feel-good activations. Here you are giving with no expectation of immediate return, except maybe for potential PR value.

2. Branded – Here the “little extra” given is usually tied closely with the brand and its positioning. It’s less random, more planned, and potentially a series of activations. This has the feel of a traditional campaign.

3. Lagniappe – the third and last type is kindness embedded into your brand. Giving little unexpected extras as a permanent part of your product or service. This is rooted in the idea of “added value” to the transaction. Not a one-off or a campaign, but an everyday practice that’s focused on your customers.

I call these “little extras” Purple Goldfish. They are done to go above and beyond the transaction to honor the relationship.

I’m going to use a little artistic license on a poem by the late Dale Carnegie:

“It costs little, but creates much.
It enriches those who receive, without impoverishing those employees who give.
It happens in a flash and the memory of it sometimes lasts forever for customers.”