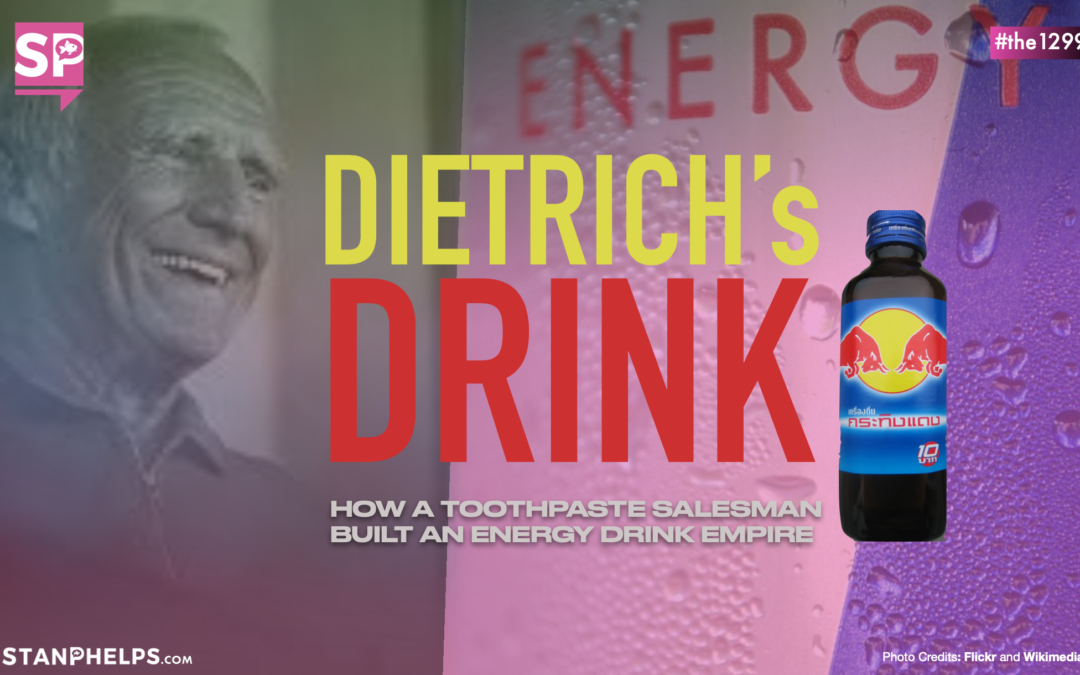 Sip on this. In 1984, the Austrian marketer Dietrich Mateschitz found himself in Bangkok on a business trip.

Feeling foggy, he drank a bottle of Krating Daeng. Dietrich found that the medicinal concoction cured his jet lag and gave him a needed boost.

He would approach the inventor of Krating Daeng, Chaleo Yoovidhya, with an offer. Dietrich proposed setting up a company in Austria to sell the energy drink abroad.

For background, Chaleo had launched the Krating Daeng brand eight years earlier in 1976. He saw an opportunity to challenge a Japanese import named Lipovitan. Chaleo’s recipe was sweeter than Lipovitan. His goal was to appeal to local taste buds.

The original label on the small brown bottle bears shows two red Indian bison just about to butt heads on a yellow circle.

1. He carbonated it to make it more appealing to international tastes. [Plus, this made it a better mixer for alcoholic drinks]

3. He changed the Thai name to the rough English translation: Red Bull

Dietrich would launch Red Bull in Austria in 1987 with the slogan, “Red Bull Gives You Wings.” Unlike in Thailand, where the drink was a staple for the working class tuk-tuk drivers, Red Bull would be marketed as an upscale drink. Through athletes and events, Red Bull would dominate through its sponsorship of extreme sports.

When other energy drinks began to copy the sponsorship strategy, Red Bull pivoted to ownership. Pioneering the practice of owning its own events and teams.

If there ever was a Pink Goldfish brand that defied normal and exploited imperfection, it would be Red Bull. David Rendall and I purposely decided not to feature it in the original Pink Goldfish or Pink Goldfish 2.0. Too obvious. Call that our own pink goldfish practice of “withholding.”

Sadly, Dietrich Mateschitz passed away in October, 2022. The 78-year-old succumbed to a protracted battle with cancer.

In honor of his legacy, let me share my favorite Dietrich quote,

“The most dangerous thing for a branded product is low interest.”