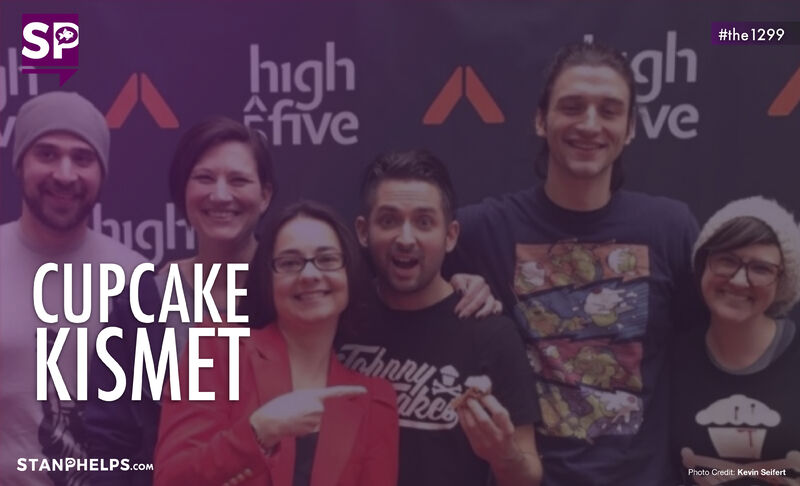 A tale of Cupcake Kismet. Five years ago I had the honor of being the Event Director for AMA Triangle‘s High Five Conference. One of our five keynotes was Johnny Earle of the iconic t-shirt brand Johnny Cupcakes.

Back to High Five, Johnny arrived at the conference about two and a half hours before he was scheduled to speak. Instead of holing up in the green room, Johnny was keen to walk around the event. While walking through the trade show area he said hello to fellow speaker Aaron James Draplin and met Brand Fuel, Inc. co-founder Danny Rosin.

Danny mentioned to Johnny that he had visited a nearby bakery named Bittersweet in Raleigh earlier that morning. He said the entire staff wore Johnny Cupcakes products. It was the de facto staff uniform. Danny suggested to Johnny that he pop by to say “hello” to surprise and delight his fans.

Johnny thought about it for a second and promptly took out his cellphone. “Why don’t we invite them to the conference to hear me speak?”

A minute later Johnny was on the phone with owner Kim Hammer.

Fifteen minutes later Kim and the crew closed Bittersweet and arrived at The Sheraton Raleigh Hotel. They were provided passes to the event and escorted backstage to meet Johnny. After a cupcake and conversation, Johnny took the stage to give his keynote on “Why the Little Things Yield Big Results.” He took time during the talk to recognize the crew from Bittersweet.

Here is a three-minute video from Tee Hamilton at Creative Alchemy about the encounter: https://vimeo.com/121635006

According to John C. Maxwell, “People in life don’t care how much you know, until they know how much you care.” One of main takeaways from Spike Jones during the conference was this, “If you want raving fans, you need to be fans of your fans.” Embrace the opportunities like Johnny did to truly connect. Sometimes it takes just a little kismet to open the door.

[Tee Hamilton, the brilliant creative who put together the video above, passed away this past week after battling cancer. RIP Tee]