“A word worth traveling to New Orleans to get.” 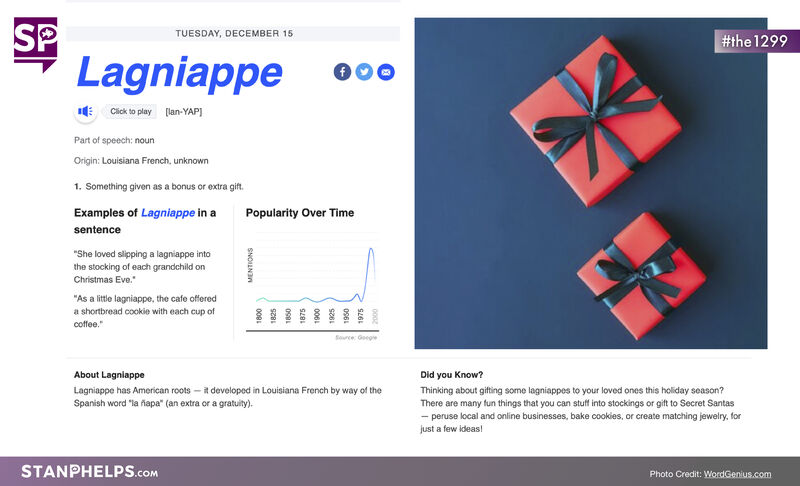 Mark Twain called it, “A word worth traveling to New Orleans to get.” That word is Lagniappe.

It is the word of the day for Tuesday, December 15th on WordGenius. It is defined as, “Something given as a bonus or extra gift.”

Twain described learning it in his autobiography Life on the Mississippi. In his words:

“We picked up one excellent word… a nice limber, expressive, handy word–‘lagniappe.’ They pronounce it lanny-yap. It is Spanish–so they said. We discovered it at the head of a column of odds and ends in the Picayune[newspaper], the first day; heard twenty people use it the second; inquired what it meant the third; adopted it and got facility in swinging it the fourth. It has a restricted meaning, but I think the people spread it out a little when they choose. It is the equivalent of the thirteenth roll in a ‘baker’s dozen.’ It is something thrown in, gratis, for good measure. The custom originated in the Spanish quarter of the city.”

Takeaway – This creole word has tremendous application in business. It is kindness embedded into your brand. Giving little unexpected extras as part of your product or service. This is rooted in the idea of “added value” that goes above the transaction to honor the relationship.