The ONE thing that can derail a presentation, and how to avoid it 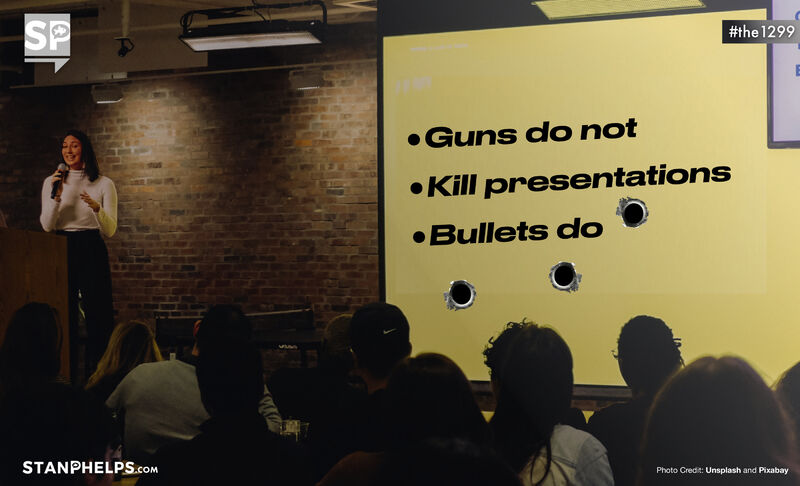 What’s the ONE thing that can derail a presentation? It’s not visuals, it’s the overuse of . . .

Text can kill your presentation. There is a funny saying about presentations. Let me spell it out for you in eight words:

– Guns do not
– Kill presentations
– Bullets do

This saying is an adaptation of a famous quote. In 1993, Senator Daniel Patrick Moynihan proposed a huge tax increase on the most vicious types of ammunition. He pointed out that, unlike guns, ammunition doesn’t last forever.

The first is the simple mistake of overusing them.

The second is the mistake of bringing them in all at once. Because what happens while you are speaking to the first bullet?…… The audience is already skipping ahead and ignoring you.

Reading your bullets word for word is the third mistake. Don’t insult the intelligence of your audience. On average, they can read four times faster than you speak. And know that people who can read…
cannot not read.

The fourth mistake is using full sentences with your bullets. Or, the cardinal sin of multiple sentences in one bullet. Uggghh!

Here is the ideal tip for effective slide design. Don’t use bullets. And if you can help it, don’t use words.

But if you do use text, here are four general principles that Alan Hoffler and I share in the book, “Silver Goldfish – Loud & Clear: 10 Keys to Delivering Memorable Business Presentations.”

First, keep text to a minimum. No more than 16 words on a slide
and no less than 30 point size for your font.

Second, speaking of fonts, pick a good one to use. Ditch the default font. I’m a big fan of Futura.

Third, AVOID THE BOTTOM of the slide.  Be mindful that text on the bottom-third of a slide may get cut off by people’s heads. Don’t put anything that’s important on the bottom of the slide. Hat tip to slide guru Wendy Gates Corbett, MS, CPTD for this tip.

In summary, for illustrating your presentation, limit text and put more power in your PowerPoint.